In the case of a large number of parts fracture accidents, the failure due to material defects occupies a considerable proportion. Material defects include metal inclusions and non-metallic inclusions, steel ingot segregation, crystal segregation, pore segregation, gases in steel, casting defects, and the like.
First, the locomotive Shiyutou fracture analysis locomotive suddenly broke the crosshead during the journey. The physical photo of the crosshead is shown in Figure 10-1. The macroscopic shape of the fracture of the inner side of the crosshead is shown in Figure 10-2. 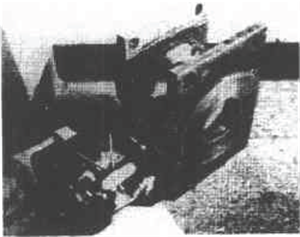 Figure 10-1 Photo of the crosshead fracture

3. Metallographic analysis The sulphur print and low-fold test on the back side of the fracture of the inner side plate show that the casting has serious surface pores, looseness and segregation of sulfur. The metallographic structure is ferrite + pearlite. The grain size is 5-6, the oxide is 1.5, and the sulfide is 3.0.
4. Macroscopic analysis of the fracture There is no obvious plastic deformation of the fracture, there are obvious steps, and the shell line is faintly visible. It is a multi-source fatigue fracture. The fracture source of the inner plate fracture is located on the surface of the casting, and the surface of the source is smooth.
5. Scanning electron microscopy analysis Samples were taken from the fatigue source area and the fatigue crack extension area and observed under an electron microscope. It is observed that there are defects such as surface pores and surface pores in the fatigue source region of the inner panel fracture, as shown in Figure 10-3 and Figure 10-4. 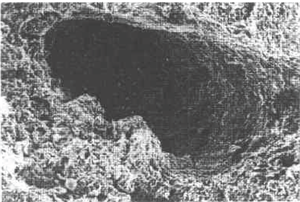 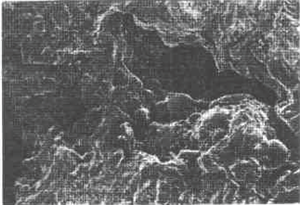 More microscopic voids (loose defects) can be seen on the fracture. See Figure 10-5 for fatigue fringes and abrasive forms in the fatigue extension zone. This shows that the crosshead fracture is a mechanical fatigue fracture.
Through the comprehensive analysis of the crosshead fracture, the conclusion is that the casting defects such as pores and holes on the surface of the casting are fatigued mechanical fatigue fracture.
Second, the sieve plate fracture analysis
After the screen is thermoformed or thermoformed, longitudinal and transverse cracks are produced at the edges of the screen openings. After a period of time, the crack size increases and the number increases, causing a break.
1. Chemical composition (Wt%) 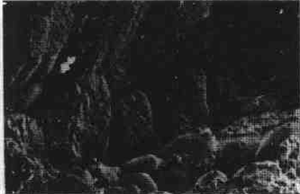 The composition is qualified. 2. Fracture analysis The macro fracture is gray, no metal luster, the fracture layer is layered, and the edge and corner of the fracture are oxidized and rusted, indicating that there is crack in the steel plate before quenching heating.
Figure 10-6 (a) is a scanning electron micrograph of the longitudinal fracture of the sieve plate (the fracture surface is parallel to the surface of the steel plate). It can be seen from the figure that the fracture is mainly along the crystal fracture, and there are more granular inclusions on the grain boundary. Figure 10-6(b) is a transverse fracture perpendicular to the surface of the steel sheet. The fracture is a mixed fracture between the crystal and the quasi-cleavage. Coarse inclusions distributed along the rolling direction can be clearly observed on the fracture, and cracks are present on both sides and both ends of the inclusion.
The chemical composition of the fracture surface and inclusions was analyzed using an x-ray energy spectrometer. The results of the analysis are shown in Table 10-4. As can be seen from the data in the table, the S content on the fracture is high. It has exceeded the S content of 45 steel by more than 10 times, which indicates segregation of S element at the grain boundary. According to the composition of the inclusions, it can be confirmed that these granular and strip-like inclusions are both (Mn, Fe)S. 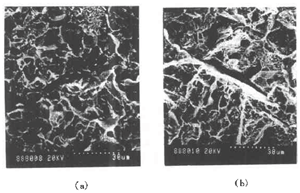 The analysis concluded that the excess sulfide is distributed along the rolling direction in the strip shape, which leads to an increase in the tendency of the steel to deform and crack. The sulfide inclusions along the soap-like distribution are cracked or delaminated; the harmful elements such as S are weakened at the grain boundary. The combination of grain boundaries makes the grain boundary weakening and embrittlement the root cause of the fracture of the sieve plate. III. Fracture analysis of large cold rolling support rolls
The 70Cr3Mo steel large-sized cold-rolled backup roll is roughed and parked in the workshop, and is split into two sections along with the vertical axis of the central body of a loud-sound roller.
1. Macroscopic fracture analysis The fracture is relatively flat and the brittle fracture characteristics are shown in Figure 10-8. No visible metallurgical defects were found on the fracture. A fracture step that is radially from the inside to the outside can be seen on the fracture. It can be seen that the crack is outwardly expanded and cracked by internal sprouting. Seven rods were taken from the position of Figure 10-9 for fracture, metallographic structure, chemical composition, hydrogen content analysis and mechanical properties test. 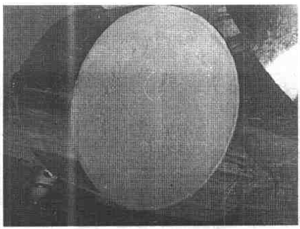 2. Micro-fracture analysis The micro-morphology of the fracture is basically a cleavage + quasi-cleavage. The segregation zone of carbide is found on the fracture of the core, and the qualitative analysis is the carbide of chromium. The material is very brittle and sensitive to crack propagation. A number of brittle fractures formed from non-metallic inclusions or small carbide particles are seen on the fracture as shown in Figures 10-10. 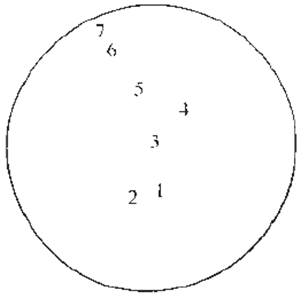 Figure 10-9 Schematic diagram of sampling position from the fracture 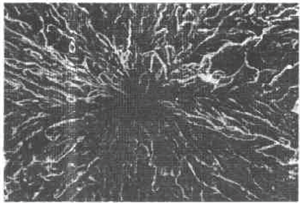 The characteristics of the shredded hydrogen-brittle fractures are shown in Figure 10-9, 1, 2, 3, and 4 positions. See Figure 10-11. More transgranular or secondary cracks along the crystal are also seen on the fracture as shown in Figures 10-12. No obvious metallurgical defects were found on each fracture.
3. Metallographic structure The results of metallographic examination are shown in Table 10-5 and Figures 10-13 and 10-14. 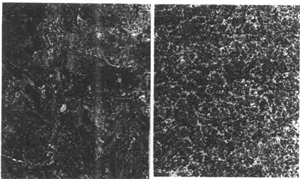 7. Analysis The support roller is made of 70Cr3Mo. The sensitivity of this material to hydrogen embrittlement increases with the increase of carbon content. In the range of 4% chromium, the sensitivity to oxygen increases with increasing chromium content. From the microscopic analysis of the fracture, the core of the roller is very brittle and the crack sensitivity is very strong. A little bit of non-metallic inclusions or carbide particles can be a source of brittle cracking.
The microscopic features of the hydrogen-brittle fracture were found from several fractures near the heart. From the data of hydrogen content, the hydrogen content is not high. This is mainly because the sample was taken for more than one month after the roll was broken, and the hydrogen sample was not analyzed in time after processing, and it took another week to analyze. So hydrogen has largely escaped.
Hydrogen embrittlement has the most obvious influence on the shrinkage rate of the section. The mechanical properties test is performed immediately after sampling and processing into tensile specimens, and the effect of hydrogen is more obvious. From the mechanical performance data, the shrinkage of the cross-section of several samples located at the core is very low. The shrinkage rate of the section at different locations corresponds to the level of oxygen content.
From the chemical analysis, the carbon, phosphorus and chromium in the heart are high.
The ideal structure for the heat treatment of this roll is spherical pearlite and the core structure of the roll is layered pearlite + network carbide. This type of tissue is subjected to stress differences and is highly sensitive to cracks. A good example is the transgranular or secondary crack on the fracture.
The roller is tempered at medium temperature, the surface hardness is as high as HS71, and the thermal stress is high. For the axial forgings, the thermal stress exists in the form of a three-way tensile stress with the largest axial stress. There is a certain amount of hydrogen in the steel (the hydrogen content in the riser is 2.3 ppm). The dislocations are accumulated under the action of internal stress to form a microcrack-fracture source. The stress causes the tip of the microcrack to form a stress field of three-way tensile stress, which promotes the diffusion and aggregation of the hydrogen source desolved from the solid solution to the stress field. The hydrogen atoms in the microcracks combine to form hydrogen molecules, which generate high hydrogen molecular pressure in the cracks, and the superposition with the internal stress causes brittle fracture of the steel.
The conclusion is that the internal stress mainly caused by thermal stress in the roll is the main reason for the roll cracking. The higher hydrogen content in the roll, the core layer flaky pearlite + reticulated carbide structure after heat treatment are all important causes of multi-source brittle cracking.